How much energy does cryptocurrency consume?

Bitcoin and other cryptocurrencies are all over the news as the crypto market continues to fluctuate wildly. Any long-term crypto trader should be accustomed to the sometimes drastic changes in market price. However, more recently, people are talking less about the money and more about the environmental impact of the blockchain.

What is Bitcoin, and where did it come from?

Bitcoin was the first significant cryptocurrency, mysteriously developed in 2009 either by a group of software developers or an individual known as “Satoshi Nakamoto.” Bitcoin managed to keep a low profile under the radar for a few years until 2011 when the FBI became aware of the Silk Road trade network on the Dark Web. In 2009, Bitcoin was worthless. In 2011, it was worth $1. Now in 2021, one Bitcoin is worth somewhere between $40,000 - $60,000.

Bitcoin became a popular currency on the Dark Web because transactions were impossible to track through the blockchain in the early days of crypto. However, today, advanced blockchain analysis software can track criminal activity through the web. Think twice before downloading a Tor Browser on your home computer, or you might find yourself on the naughty list, like Ross Ulbricht, also known as “The Dead Pirate Roberts,” creator of the Silk Road Dark Web marketplace; arrested by the FBI in 2013, and charged with multiple conspiracy charges. 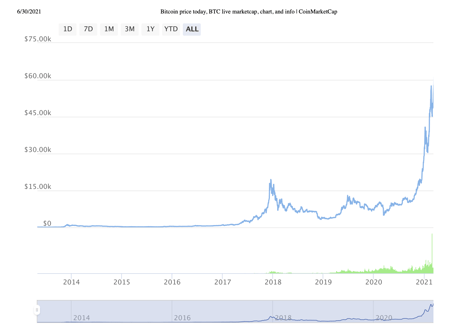 Why is cryptocurrency terrible for the environment?

Countless individuals and businesses have hopped on the bandwagon in recent years, investing in their own crypto mining farm. A crypto mining farm is a warehouse facility dedicated to solving blockchain equations for profit. These mining facilities may contain hundreds or even thousands of devices that run 24/7 to generate Bitcoin and other cryptocurrencies.

It is a technological gold mine, but it comes at a price. The amount of energy required to mine Bitcoin is now almost three times as much as the energy required to mine actual gold. Mining a single Bitcoin can take up to 72,000,000,000 Kilowatt Hours of energy to mine. To give you a frame of reference for that number, the average household in Canada uses about 7200 Kilowatt Hours annually. At that rate, crypto miners may find it difficult to break even on their investment after factoring in the cost of electricity. But what about the environmental cost of cryptocurrency?

65% of the world’s Bitcoin miners live in China, where most of the energy is generated from coal. This is just one of the reasons why China recently banned crypto-mining facilities. The energy demand of these computations rose to an unsustainable level. In addition to the energy demands, the electronic waste generated from the computers and other byproducts amounts to almost 12 kilotons of e-waste.

If cryptocurrency is so bad for the environment, why does it continue to grow?

Advocates for the cryptocurrency market will tell you that this is the future of currency, but what exactly drives the value of the currency? One of the main benefits of cryptocurrency is that it does not rely on banks or a single point of failure. The data isn’t stored in any single place; but moved through a network of millions of computers. It’s also not linked to any country so it can’t be easily regulated. In addition to that, blockchain is resistant to hackers because the currency is decentralized. Interactions used to be impossible to trace, but after the Silk Road emerged as a black market on the dark web, intelligence agencies can track transactions.

If you didn’t understand it before, you should start to understand why cryptocurrency is becoming so valuable. The future of cryptocurrency is exciting. Nobody knows what will happen in the coming years, but one thing is sure; the amount of energy demanded by cryptocurrency is still too high, making it environmentally unsustainable. However, technological developments in renewable energy could soon catch up to the global energy demands. If crypto-miners switch from fossil fuels to a renewable energy source, maybe one day soon, it will become sustainable.

Are you looking to get in on the action?

Trading in Bitcoin and other cryptocurrencies is still considered a high-risk trade option. There is no guarantee that the value of the currency will go up or even hold its current value. Recently you may have heard of Dogecoin, a memestock that was popularized by the Reddit community and influencers like the infamous billionaire, Elon Musk. The value peaked this year and then tanked rapidly with an uncertain future. Any experienced crypto trader will tell you these three tips: invest small amounts over a long period of time to get the best price; follow /r/wallstreetbets on Reddit to observe trends, and never invest anything that you’re not willing to lose.